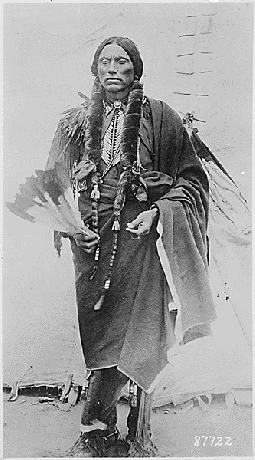 Quanah Parker is a young Quohadi leader among the Indian bands that bolt from the reservation to renew free lives in Palo Duro Canyon. After escaping Mackenzie’s attack and round up on September 28, 1874, his band becomes the last holdout against the Army’s relentless winter campaign. On the edge of starvation, Quanah’s sruviving band members surrender themselves at Ft. Sill (Oklahoma) on June 2, 1875. As he adapted and flourished, Quanah became a nationwide celebrity under the rubric, “The Last Commanche Chief.