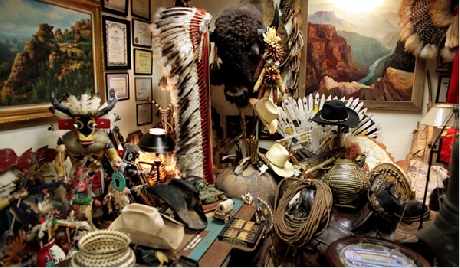 Using public money, Steve Reed, mayor of Harrisburg Pa., collected the Old West - Indian and Cowboy alike - and hoped to build a museum there to display its thousands of items. And there they’ve sat, in a dusty warehouse, odorized by the next door city incinerator. Under pressure from the City Council, the mayor’s collection is being cataloged by a Texas-based auction house and slated for sell-off in October 2007. Multiple legacies were taken, and continue to be at risk; as our living pasts become new Gilded Age collectibles, and recede from the public domain. What’s right with this picture? (Photo: NYT/Angel Franco)