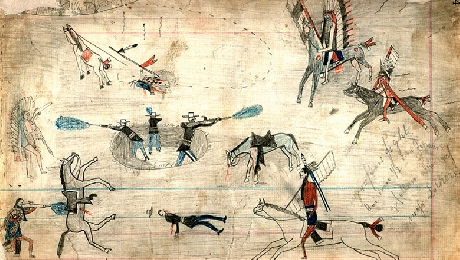 After the Red River War, 72 Indians (Commanche, Kiowa and Cheyenne) are designated “the ringleaders” of the revolt against the reservations. In a reverse Trail of Tears, they are taken to Ft. Marion, St. Augustine, Florida. Some draw such compelling images of their free lives, including the Red River War, on ledger paper. The images (known as Kiowa ledger art) are part of a special assimilation program conducted by Army Colonel Richard Henry Pratt. They are bought up as collectibles by New England Victorian tourists, some becoming valuable assets. In 1878, many of the “rehabilitated” Indians are released and returned home. The next year (1879), Pratt goes on to start the famed Carlisle (Pa.) Indian School; whose motto was “Kill the Indian, (to) Save the Man.” In sum: while two Victorians are taking over in the Palo Duro, the children of its dislodged Indians are being taught to become Victorians.