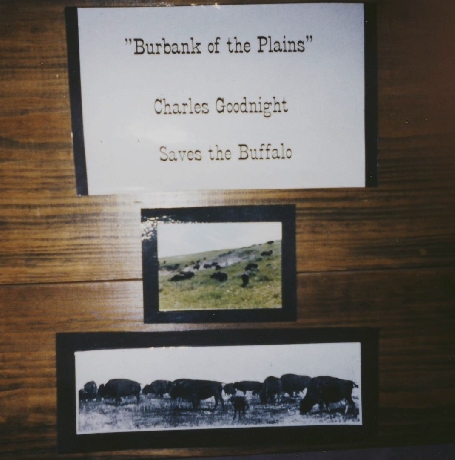 Charles Goodnight is called the Savior of the Buffalo in places like this display at the Saint’s Roost Museum in Clarendon, Texas. Some differ, citing the explosion of cattle ranching, championed by players like Goodnight and Adair (and railroad investors), as near destroyers of the species. Others attribute the saving of the JA group to Goodnight’s wife Molly (Mary Ann Dyer). Goodnight crossbred them with buffalo to produce cattalo. Other contenders, like the uber trophy-hunter Teddy Roosevelt, are more widely thought of as the buffalo’s savior. And, for its part, the world-famous Bronx Zoo (Bronx, NY) restarted a herd in 1899, where some descendants reside to this day. In 1998, the State of Texas agreed to pay the JA for the transfer of its last 50-70 pure bred (98% pure) Goodnight-JA Ranch herd to nearby Caprock Canyon State Park, where they comprise the official state herd. Because the bison kept busting its fences, the JA Manager decided their time there had come to an end. (“Burbank” refers to Luther Burbank, the pioneering American botanist.)