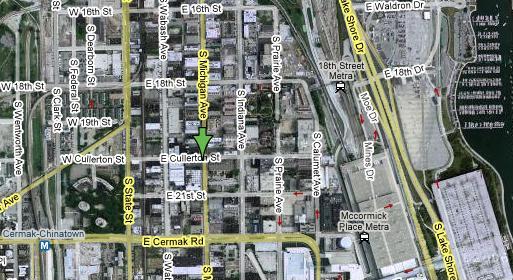 “Reaching Chicago, the Adair’s are briefed by Sheridan on the state of Indian warfare to the South. Because it’s dangerous, they also get a cavalry escort to go hunting. After all, Mrs. Adair’s brother, Craig, was serving on Sheridan’s staff; and he knew her father James, a hero-General slain in the Civil War. Their eyes may well have opened to the emerging post-Indian commercial opportunity.”

The arrow marks the spot where Gen. Phil Sheridan’s mansion once stood in Chicago, roughly today’s 2000 block on S. Michigan Ave., where he had his Home and Headquarters. On September 19, 1874, the Adair’s visited Sheridan for a personal briefing on their trip west. Mrs. Adair’s brother Craig was on Sheridan’s staff, and Sheridan personally knew her father, a war-hero General, who was killed in the Civil War at the Battle of the Wilderness.